John ran as a candidate for Dignity Party in the South Australia state election, held on 17th March 2018, in the seat of Torrens. His goal was simple – to increase the votes for the Upper House candidates, and for Kelly Vincent to retain her position in the Legislative Council. Kelly has been a voice for people such as those with a disability for the past eight years. This blog shares the results and his experiences with the campaign. John’s opponents were Dana Wortley (Labor), Therese Kennedy (Liberal) and Alex Dinovitser (Greens). 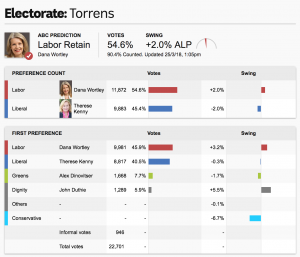 It was expected that Dana Wortley (Labor) would retain the seat, and the swing towards Labor was 2%. John’s goal was to receive 5% of the overall vote, and this was achieved with a share of 5.9%, an increase of 5.4% since the 2014 election. 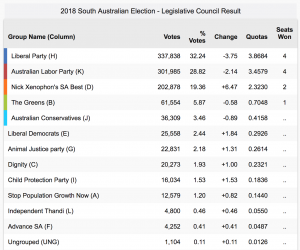 Unfortunately, Kelly Vincent wasn’t re-elected, and the Liberal Party and Australia Labor Party won four seats each, SA Best received two seats, and the Greens gained the final seat. The vote for Dignity Party increased by one per cent. However, over 60,000 votes were required, and only a third of this was achieved.

Why did John run as a candidate for Dignity Party?

Following his accident in 2009, John gained experience in living a life with a disability, namely paraplegia and chronic pain. During his travels, he came across many situations that either prevented his access or made it more difficult than it should have been. The Disability Discrimination Act (DDA) makes it unlawful to discriminate against a person due to their disability, including employment, using services, accessing public places and others.

When John encountered a business in violation with the DDA, he would talk to them, and encourage them to make changes. The majority of businesses did the right thing, and a few were reported to the Human Rights Commission.  Initially, John aimed at improving access for himself, which then extended to advocacy for all people with accessibility issues. This lead John to discover Dignity Party and was accepted to be a candidate in the 2018 election. The seat of Torrens had no Dignity candidate, and given John had lived there for over 20 years, it was the perfect match.

Dignity party held a large number of informative sessions aimed at teaching the candidates about politics, and in particular, running a political campaign. Campaign Manager Anna Tree and Office Manager Kathi Tucker both had extensive political experience, as did Kelly Vincent,  with eight years in the Upper House. Many of the candidates had experience in previous campaigns going back to 2006. John’s campaign was based on the needs of the marginalised in the community, and he attended events including AGMs, charity events, quiz nights and other events, some of which were included in his blog.

One of John’s focus during the campaign was social media, which included regular posts on Twitter, Dignity Party FB Group for Torrens, and this website. Other avenues of marketing included two letterbox drops of the eleven suburbs and finding volunteers to provide the “how to vote” cards to voters, on election day.

John categorised the whole experience of running as a candidate into three categories – The Good, the Bad, the Funny and the Ugly.

The Ugly (not literally)

The Liberal party placed an interesting political advertisement in my letterbox! 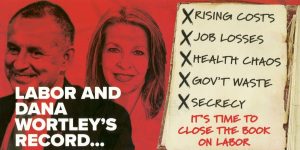 John is uncertain about the future as a candidate in the 2022 election but believes in the goals of Dignity Party.  He wants to help the party regain a seat in the Upper House. There may be other avenues of helping Dignity Party too.

This site uses Akismet to reduce spam. Learn how your comment data is processed.

John Duthie was a candidate for the Dignity Party, in the South Australian election on March 17, 2018.  He contested the seat of Torrens.